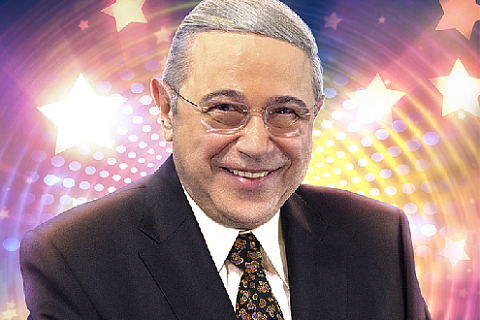 How fast the time flies! It seems to Yevgeny Petrosyan that he first took the professional stage which was at Variety Theatre on September 20, 1962, just recently. It is definitely worth noting that being on stage for 55 year while staying on top of the theatrical and humor variety entertainment is an absolute and yet unsurpassed record.

Today the People's Artist of Russia Yevgeny Petrosyan is a maitre in his genre, a much-loved artist, a distinguished director who staged over a hundred performances, concert shows and over a thousand TV shows.

What matters most, he is still an actively performing artist in a great artistic shape. His concerts always go with a big success. His visitors often say that a "live" concert stirs a hundred times more of positive emotions than a concert seen of TV.

Watching TV is a completely different thing - we do it while doing other things, in between phone calls, visits of guests, drinking tea and other domestic chores. While going to a concert is an event in itself which will bring joy. It is the actual live contact that keeps His Majesty the Theater going.

Be our guest! Enjoy a big evening full of fun! We have no doubt that the aftertaste of pleasure from this concert will stay with you for quite a while!

Petrosyan's humor is the kind one. Even when he laughs through the tears, when he speaks of serious things, when he makes fun of some things about us - his laugh still serves the good. This is a feature that visitors often note about the artist. And this is exactly what art is meant for - to serve the good. If it doesn't, then it's not Art. All the great humorists were great humanists as well. Petrosyan's humor makes him not only a high-class professional, but also a civil artist. Therefore, a big-time artist. And people coming to his concerts, laughing through tears, applauding and asking for a extra ticket make it clear that they trust the artist and share his opinions.

Although Petrosyan has been on the stage for many years now, he is still just as full of energy, young, funny and awesome, moving and loyal - indeed, loyal. He is loyal to his thing which he believes to be the sense of his life, loyal to the theatre where he was born as an artist, loyal to the legacy of his teachers - he learned the profession from such wonderful masters as Rina Zelenaya, Leonid Utesov, Aleksey Alekseev, Lev Mirov, Maria Mironova. He is loyal to his audience. And always with him is his implacability to evil, violence and falsehood, high demand to himself and his professional skills, his artistic charm and his soft smile, respect and love to those who stand on the other side of the stage.

They call him Master today. This well-deserved title crowns the high scenic culture of the Artist, his civil beliefs, social insightfulness, courage and faith in himself and his art.

In one of his plays, Petrosyan says the words: "It is our happiness that we find enough strength in ourselves to laugh through tears and to make each other laugh too, which I do my best to do as well"

Yevgeny Petrosyan is a King in his kingdom. Everything here is Petrosyan-style: the language, the jokes, the manner to say the evil truth without humiliating. Because if somebody is humiliated, if his human nature is smeared, it is not humor and not satire but a scandal. And for that you don't need to go to the theatre. The best thing is that in his kingdom Yevgeny Petrosyan is sitting not on the throne but at a desk. Sometimes it seems like he sleeps at the desk too as he is always at work. The throne in his kingdom is kept for the Audience. When the drama theatre actors say, "His Majesty the Theatre", Yevgeny Petrosyan says, "His Majesty the Audience!"