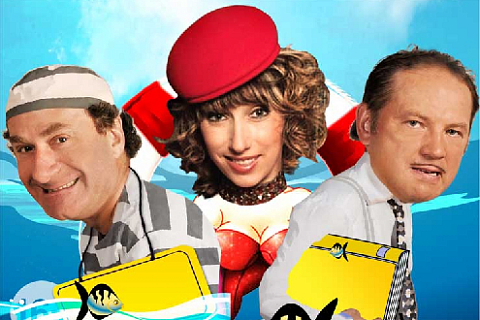 On a nice summer day the main character goes to the beach for a swim. There he meets a charming young lady, unaware that it is the Fate itself awaiting for him on the shore disguised as a glamorous girl. That very Fate, ancient, blind and ruthless. The fateful blond Eva (Elena Borobey) storms into the life of the sappy translator Bruno (Semen Strugachev) like an unrestrained force. She crushes his car - and his whole life at that. And the miserable lover, having taken Eva's crime on himself, finds himself in prison and then in the insane asylum. But the extravagant and snaky lady won't let go of him. She helps him out of the hospital - only to offer to kill her husband Mario…

The visitors will see a criminal comedy staged under all the rules of the detective genre. The center of events is a femme fatal. She is the very passion element itself, the fate itself breaking into our door without knocking. Such a woman is a secret dream of any man. That's why none of them can resist her. Any woman wants to be like her. But be careful for what you wish - as you may get it! Her name is Eva and she has a husband and a lover. Somebody is always odd in this triangular. "Italian-Style Love" is a great dose of adrenalin for those who easily fall for the opposite sex.

According to Strugachev, Elena Vorobey is the best Eva in all the long history of this play. She has just joined the cast, but fit in immediately. «Now I understand that she is an actress of many more plays,, — admits Semen, —  There is still so much space unopened in there. She is a wonderful drama actress - Liza Minnelli pales before her! Yet, you never know what our lady would say on stage this time. She surprises us all the time. If Aldo Nikolai heard our text, he would turn over in his grave. Lena has simply remade the play to herself. She creates terrific texts right on the go. You cannot imagine how Vorobey mocks the poor Mario (Andrey Fedortsov), like, you are Winnie-the-Pooh and you will blow up in the air soon. The audience is convulsed with laughter, every time it's like a different play».

The the plays looks completely different when Evelina Bledans plays Eva. It becomes a sheer joy and pleasure to a woman's heart. "Italian-Style Love" turns into a very peculiar catwalk-comedy. Enchanting Evelina will swirl you in a fast change of episodes, dresses, hats and shoes!!! You will see several suitcases of haute-couture garments by the world's best dress-makers which Evelina picked herself!

The characters, dialogues, the fast-developing story in the play are created by a true master who would probably be terrified at what's happening in the play if it were not so… hilarious. The play contains many songs and music scenes performed beautifully by the artists.