Group booking Special conditions are available for accommodations for groups of more than 10 people.
Home → Hotel → News → “Every brilliant thing” play (July 8) at the VDNKh House of Culture 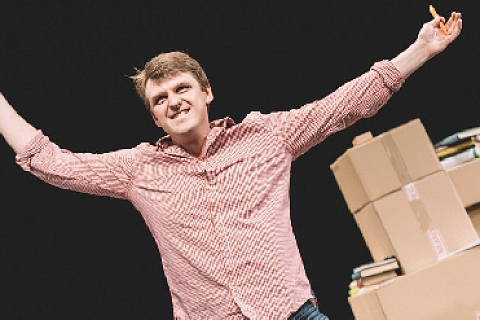 As part of the V International Festival of Arts "Inspiration" in the VDNKh House of Culture, the play "Every brilliant thing" based on the play of the same name by Duncan Macmillanon will be presented on July 8. The play is performed by the Lithuanian improvisational theater Kitas kampas.

Lithuanian actor and director Kirill Glushaev gave this work a new life thanks to the main role performer Matinas Nedzinskas.

The performance is brilliantly complemented by the music performed by jazzman Dmitry Golovanov. There is only one actor on stage, but the performance cannot be called a one-man show. Martinas actively interacts with the audience and even brings casual viewers to the stage. As a result, the magic of random scenes appears, reinforcing the sincere connection between the actor and the audience.

The “Every brilliant thing” play will often make you both laugh and brush away the tears. This is a story about the most important things in life - the brilliant things.

Lithuanian theater Kitas was founded in 2009 and is the only improvisational theater in the country.

Duration: 1 hour 30 minutes. Age limit: 16+. The performance is in Lithuanian with simultaneous translation through headphones which will be provided to visitors against some personal document.