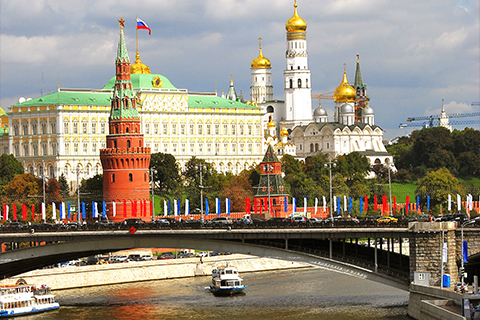 The 868th anniversary of Moscow is coming. Muscovites and the guests of the capital are going to celebrate the City Day on the 5th of September, 2015. Cosmos hotel congratulates everyone who’s life is connected to this city on seven hills.

The personnel of Cosmos wishes Moscow and its inhabitants success and prosperity, more joy and less stress. On its 868th anniversary the City offers Muscovites theatrical performances, festivals and concerts of superstars.

The Eve of the City Day

The celebration promises to be grandiose. The theme of the holiday is “Triumphant Moscow”. First events will be held on September, 3. Enjoy classical music on the concert “Eternal music for the eternal city”. Tamara Gverdtsiteli, Emin, Quattro and many other artists will step on the stage of the Bolshoi theatre.

The grand opening ceremony is going to take place on September, 5 at 10 AM on the Red Square. The organizers prepared a spectacular retrospective of Moscow and Russia. 1 200 representatives of the best military orchestras of the world will take part in a ceremonial march.

Street musicians and artists of Moscow theatres will perform for you on Old Arbat street from 1 PM till 10 PM. “Moscow Triumphant” photo exhibition will take place there as well. Triumfalnaya Square will host literature readings, theatre events and many other interesting things for poetry lovers.

The concert “Live sound” will take place at Patriarch’s Pinds from 1 PM till 10 PM. Expect to see artists like Uma2rman, Valeri Syutkin, Tesla Boy, Petr Nalitch and Sergei Zhilin’s Fonograf orchestra. Hurry up: there are only 700 seatings with cushions in the stalls. You may take the cushions as a present. The amphitheatre contains 1 300 guests.

The City Day at VDNH

“Children’s city” festival will open at VDNH which is in 5 minutes from Cosmos hotel. Young Muscovites can pretend to be inventors there. A whole city full of adventures, fun and exciting discoveries will be at their service. Each of 20 festival stages has prepared a great number of surprises.

Visit Cosmos after a hard day full of fun with your kids. We offer 1 777 different rooms. Besides, Terrassa restaurant has a special children’s menu.

Free excursions on the City Day

If you want to attend one of the excursions, here are 8 meeting points:

Fireworks is about to launch at 22:30 from 12 launching places and 19 parks. We hope that organizers have prepared something special.

Got a spare minute? Use the hashtag #МоскваТриумфальная to find many interesting things is social networks. Once again, happy City Day! This September, 5 we will remember for a long time.